Green sympathisers support nuclear energy, across a range of questions.

A major new Ipsos poll in the UK commissioned by the Greens For Nuclear Energy campaign, reveals that the majority of people involved in environmental campaigning organisations are broadly supportive of nuclear energy.

This finding contradicts the traditional image of the green movement.

“I’m encouraged that environmental campaigners who have typically always been viewed as opposed to nuclear energy, are finally seeing its value to combat climate change. I always believed that common sense would prevail and these poll findings have endorsed that confidence in the green movement. Green activists are indeed practical people, focused on real-world solutions to the climate emergency.”

Between 28th & 31st January 2022, Ipsos conducted an online survey among a nationally representative quota sample of 3,388 participants aged 16-75 in the UK, with the data weighted to a nationally representative profile. 22% (a base size of 728 of those interviewed) said they were at least to some extent “involved in an environmental campaigning organisation, for example Greenpeace, Extinction Rebellion, Friends of the Earth, the RSPB, WWF, the Green Party, etc,” where the poll defined “involved” to mean “organise or participate in events arranged by the organisation, or are a member of the organisation.”

Of those who identified themselves as involved in an environmental campaigning organisation, 50% support using nuclear energy to generate some electricity, whereas only 19% oppose. Among the UK as a whole, 44% support and 19% oppose.

(Q3.) To what extent would you support or oppose the building of new nuclear power stations in the UK to replace those that are being phased out over the next few years? This would ensure the same proportion of nuclear energy is retained (that is, about 16 percent of electricity generation).

Of those who identified themselves as involved in an environmental campaigning organisation, 53% support replacing the UK’s existing nuclear power stations, whereas only 21% oppose. Among the UK as a whole, 44% support and 23% oppose.

Q5. To what extent would you support or oppose the following being done with the UK’s nuclear waste? “Recycle to use as fuel to produce electricity again.”

Overwhelming majorities of both the general public and those who identified themselves as involved in an environmental campaigning organisation support recycling nuclear waste as fuel to make more electricity.

Of those who identified themselves as involved in an environmental campaigning organisation, 38% said their views about climate change made them more favourable to nuclear energy, whereas only 20% were less favourable. Those involved in environmental organisations were more likely to think their views about climate change had made them more positive about nuclear energy than is the case for the general public (26% more favourable, 17% less favourable).

Q10. Would you feel more favourable or less favourable towards the Green Party if it favoured nuclear energy, or would it make no difference?

Q11. How well, if at all, do you know the organisation, Greens For Nuclear Energy?

35% of the general public say they have at least heard of Greens For Nuclear Energy, whereas 72% of those involved in environmental organisations say they have heard about us. 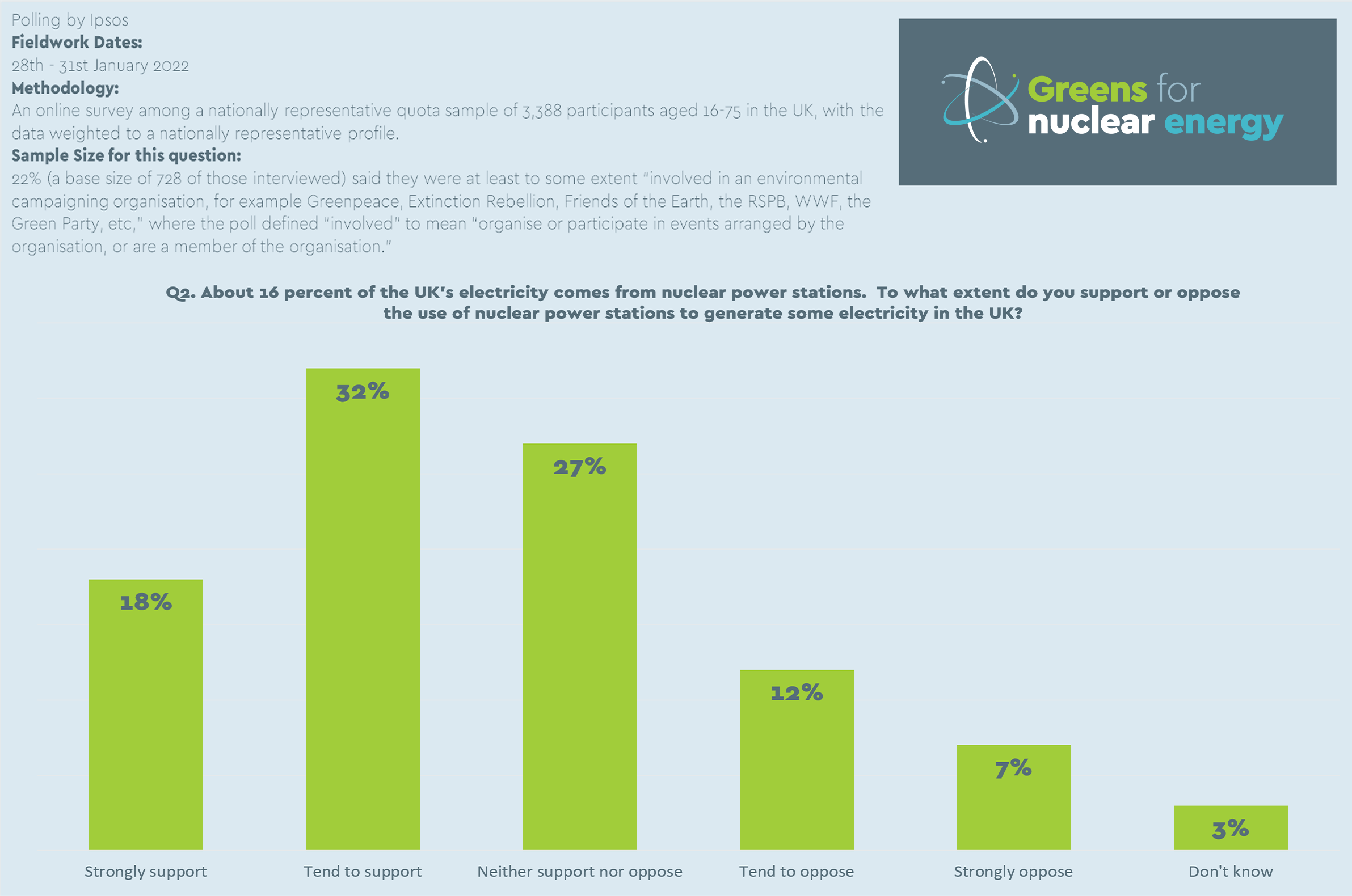 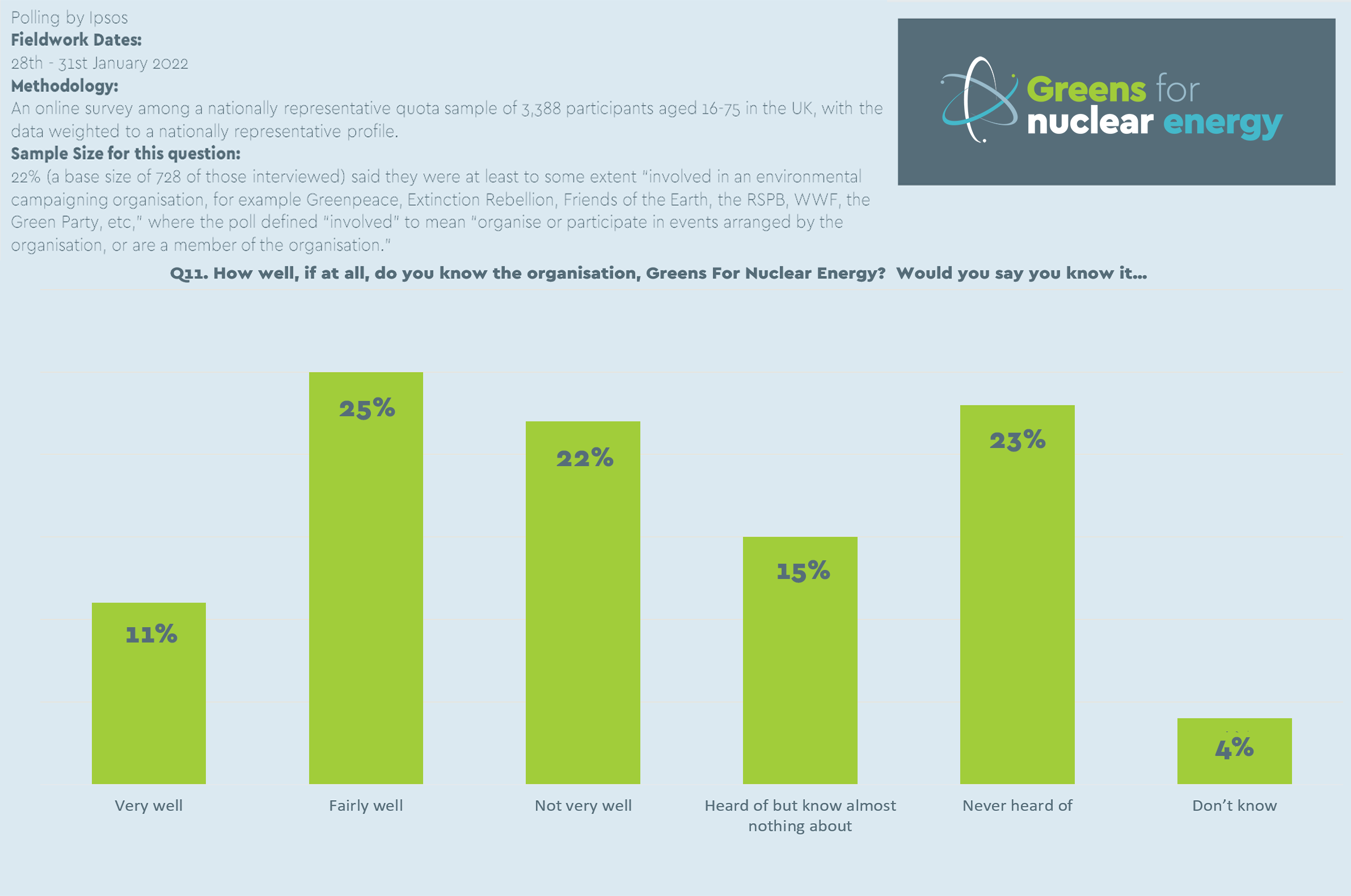 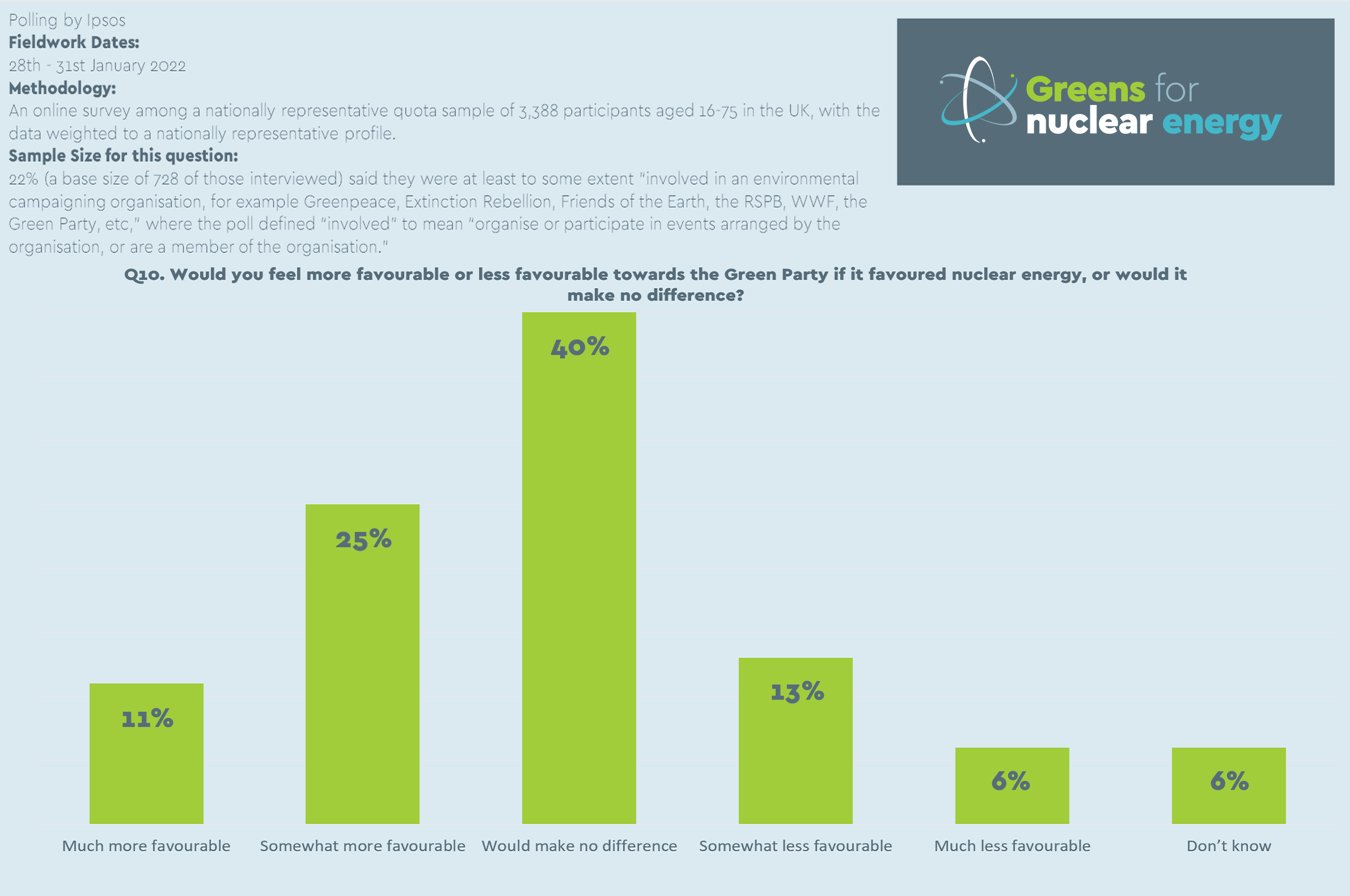 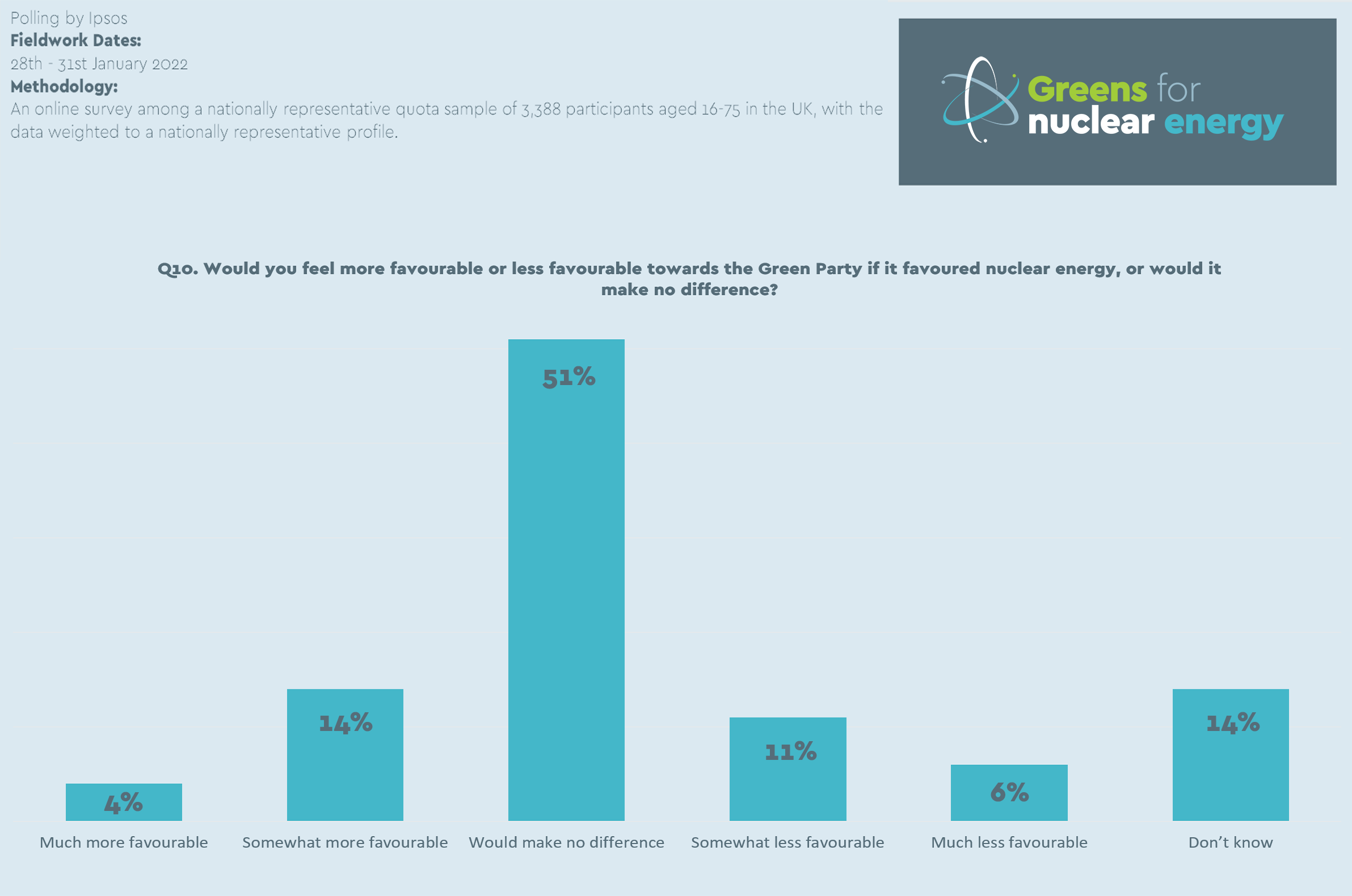 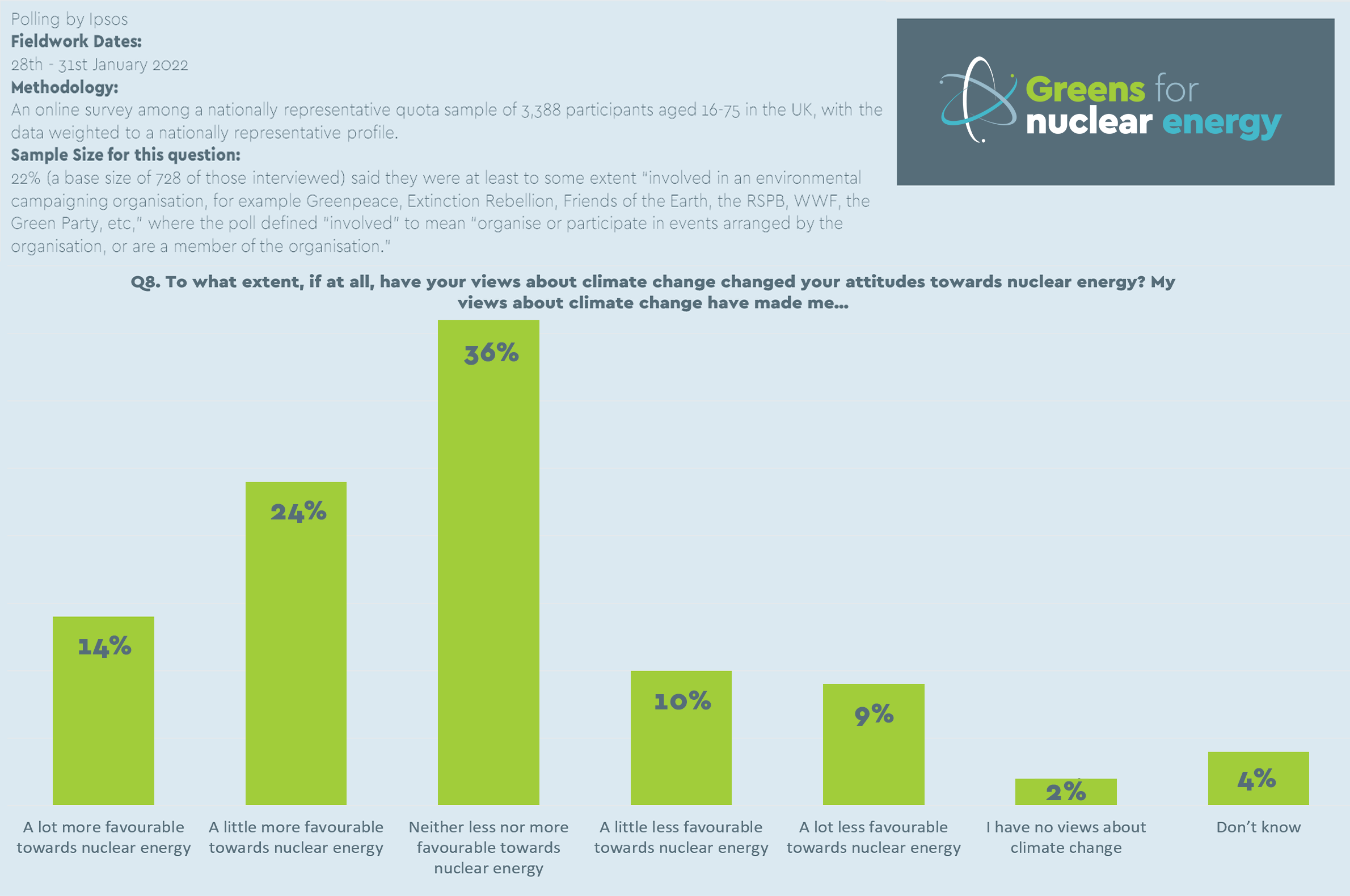 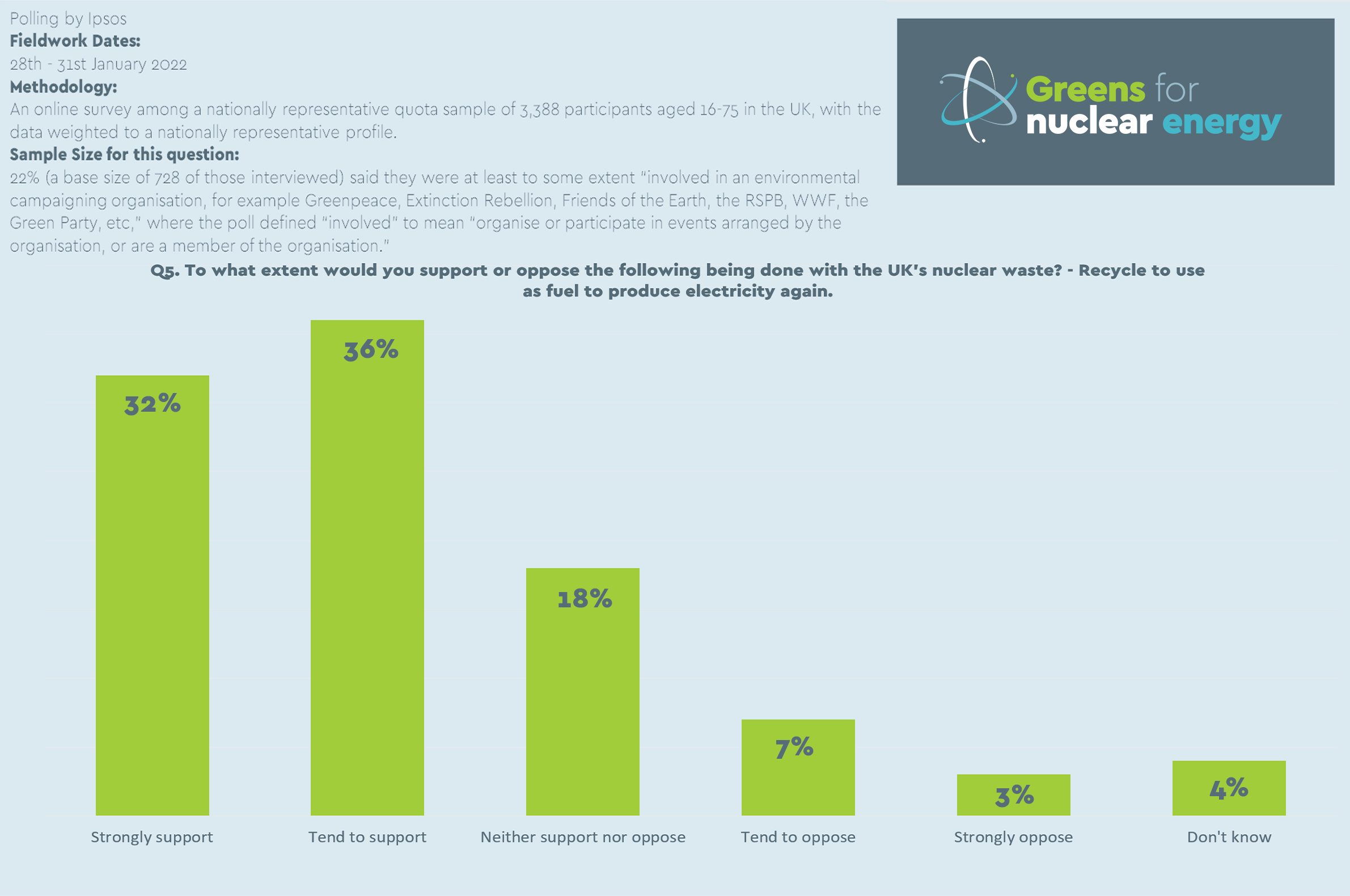 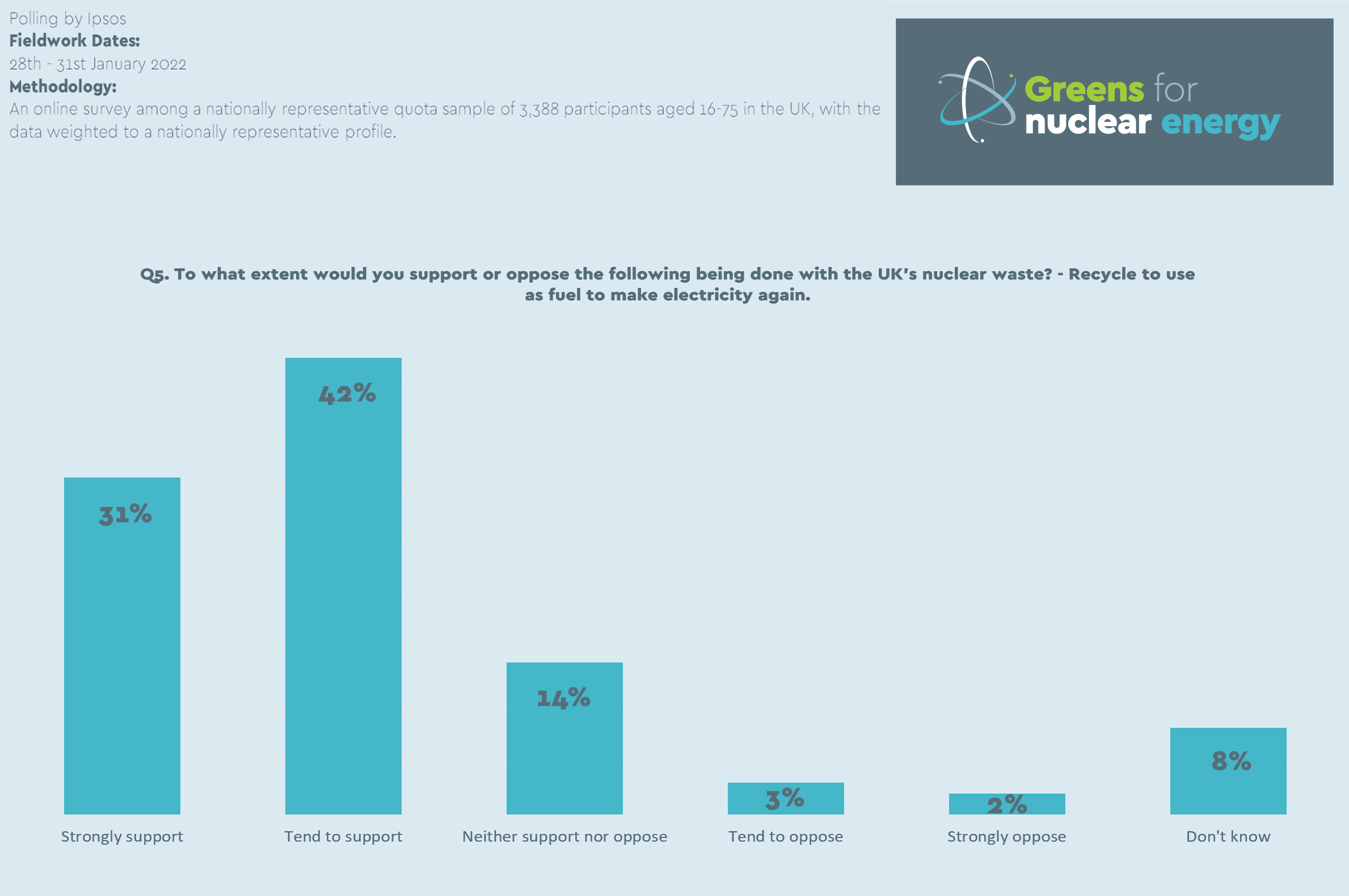 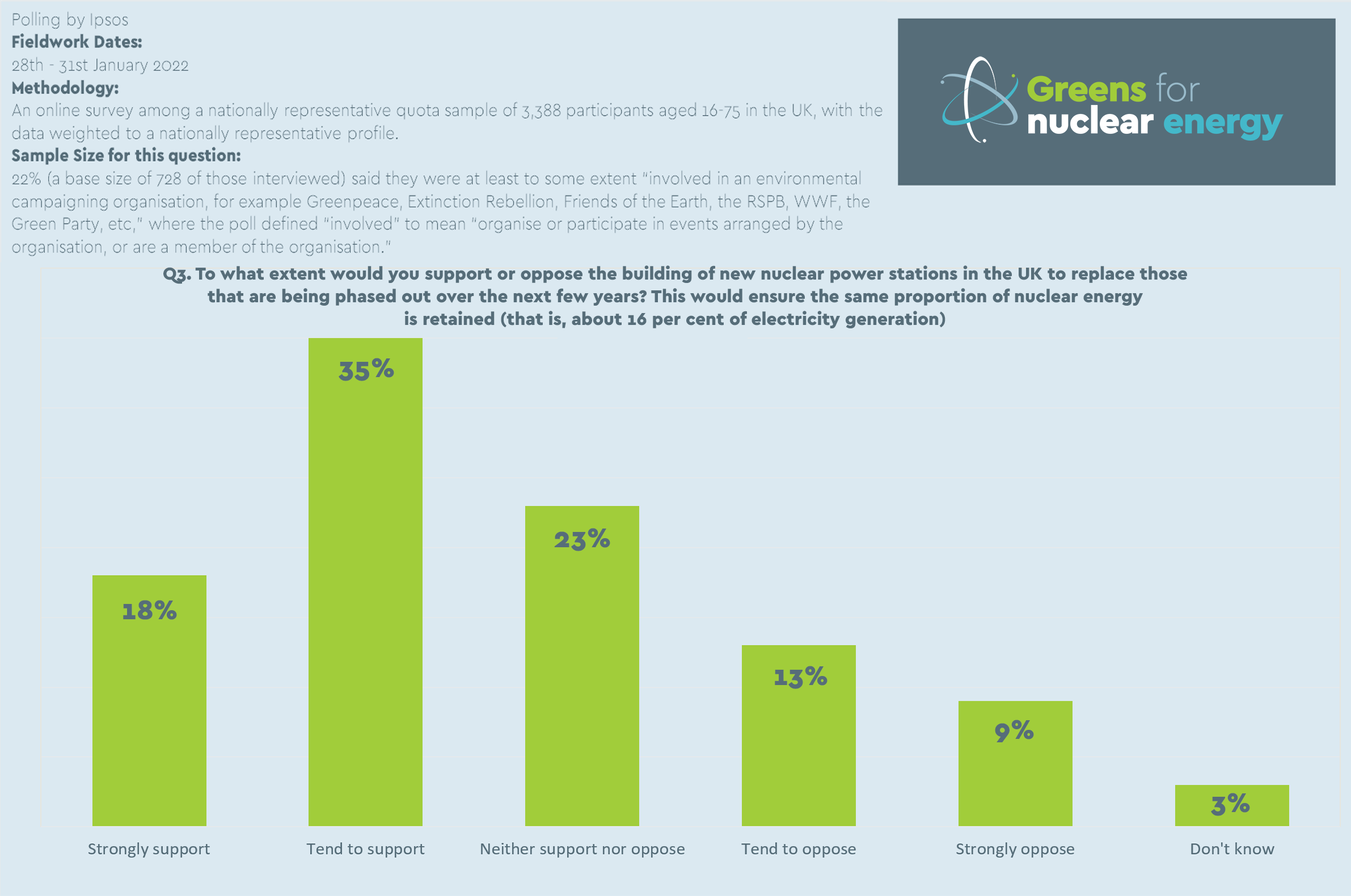 Research was conducted by Ipsos on behalf of Greens For Nuclear Energy. Online Interviews were conducted online among a quota sample of 3388 participants in the UK aged 16 to 75 using the Ipsos online omnibus. Quotas were set on age, gender, region and work status, and data were weighted by region and gender interlocked with age, working status and social grade. Interviewing was conducted from 28 to 31 January 2022.